Hot air slapped gently against the body when we stepped out of the plane. We were wandering a moment at the airport seeking the right bus stop. We had studied in advance from travel guide that a bus is the quickest choice for locomotion in such a small island like Malta. After finding the bus ticket machine and a right platform, we jumped aboard. Driver was a real kamikaze. After over an hour drive and doubtful navigation, we found finally our destination. Even a short trip on winding roads may take time, but at the same time you will become familiar with the scenery and the bus trip really does not cost much. Week bus ticket cost a staggering €6,50. A small price to pay for that in less than two hours you can reach the small country almost anywhere you want. This time a taxi was not tested, but prices are probably more expensive per trip.

Price for hotel was 180 € and that includes three nights in a double room plus breakfast. We booked our three star hotel through Booking.com, but you’ll probably get a room cheaply, if you throw an email directly to the hotel. It may be that the price is not much cheaper, but the content can be a buffet and a WLAN connection for the same money. In retrospect from the island can be found plenty of the low-cost rental cabins. With a rental residence and a private kitchen, would vacation diet be slightly more diverse, perhaps. During the vacation Maltese restaurant culinarism focus on easily to pasta, pizza and burgers. Really good ones, though. However, on the third day the taste nuances is sought mainly from local wines … Maltese kitchen brings as an alternative to rabbit, fish and seafood, which for vegetarian are there in the exotic side … Soybeans, kidney beans and fresh vegetables are missed a little bit more than in usual life.

For hotels in Malta you should check out that you have a sea view side. Endless sea landscape is much more fun and more relaxed to stare than a stone wall and drainage pipes at a hotel courtyard. Whatever the current state of mind of the relationship is. Just as the human mind, the marine landscape is constantly changing. Sometimes calm and turquoise blue, sometimes the waves crash over the rocky shores. Sometimes the sea is calm and dark, but the dark clouds overhead rise. Sometimes sun caresses and plays with the wave side reflecting the light and warmth beautifully. At the same time insidiously roast the skin surfase of a reckless northern traveller. During the spring the weather can fluctuate very quickly. 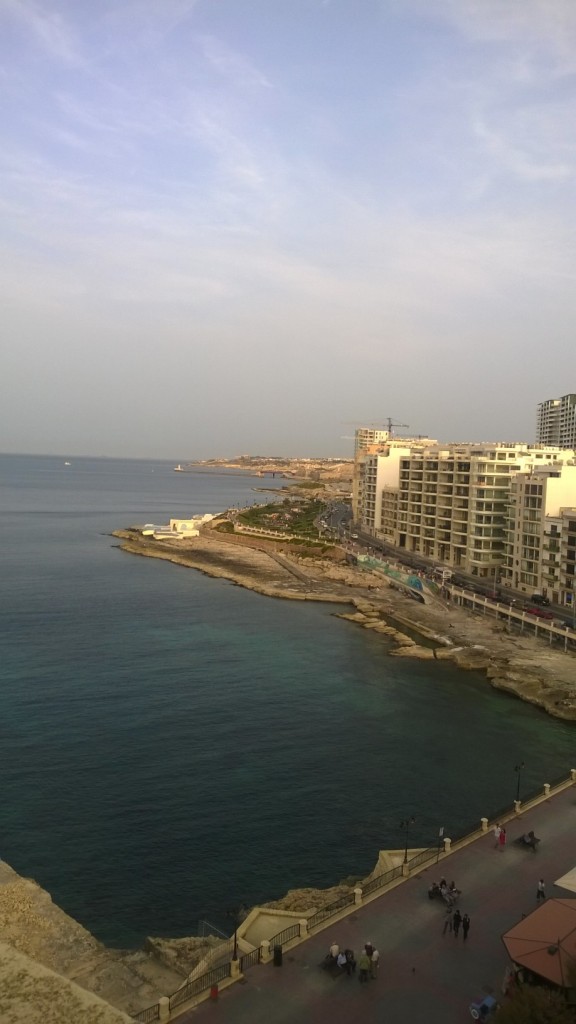 Hotels can be found with swimming pool, for sure. However you are able to swim almost every place was there pool at the hotel or not. The beaches are of the same brown stone as the entire island and all buildings. The rocky beach is nice, the sand do not go into the wrong places and a swim can be accessed either directly from the cliff edge, or else all the way down the ladder, which are dotted along the beach. Sandy beaches can be found more than one on the island, where are probably more comfort swimming facilities for kids. If you have enough time, outing main island or visiting neighbouring islands are worth exploring. 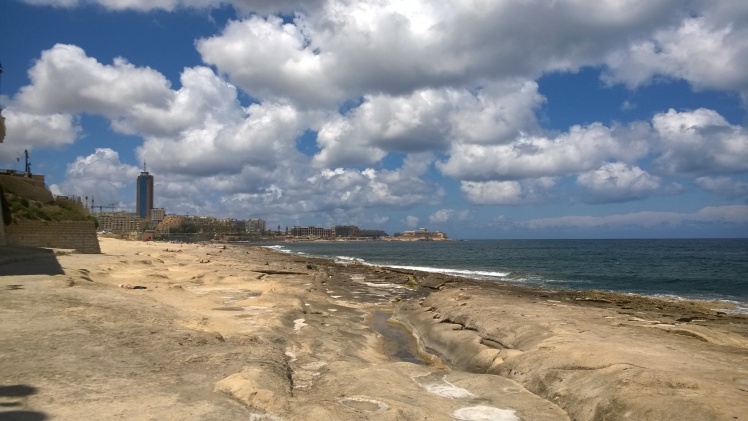 Trip target was not athletic, so the sneakers had not traveled along. However, the duo’s marathon runner felt longing for a run along Paceville and Sliema seafront boulevard. Boulevard along the beach seemed to be a jogging path for locals as well as tourists. Unlike many other similar routes this boulevard would have been long enough to a jog. Normal activities were compensated at this point with a long morning and evening walks at this promenade.

The tourist of oneself were discovered in a stage, when you sat on Dr. Fish Bubbles Fish Foot Spa with an embarrassed smile as a couple and small fishes were smacking eagerly feet dead skin cells. Treatment was initially really strange tickling sensation. Surprisingly The idea of ”the little piranhas” got used to pretty quickly and with a nice chit-chat with staff treatment time passed quickly.

Plenty to watch, feel and do. Must go back soon! The flight tickets are reserved, and of course at the hottest time of the year. And then we’ll go to the other side of the island …

One thought on “Nikinita in Malta -relationship on the road”